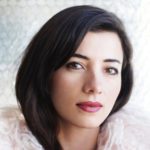 Vasicka was born in the 1970s in New York City to an Uruguayan mother and Czech father. At an early age, she had a passion for music and photography. She studied photography at the Rhode Island School of Design and later co-founded East Village Radio. Veronica Vasicka is an American businesswoman, electronic music expert, and radio dj. She is the founder of Minimal Wave Records, a record label focused on obscure electronic music from the 1970s and 1980s.