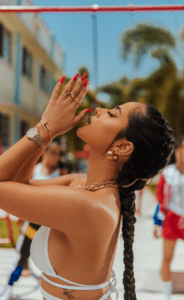 Becky G – Singer, songwriter, actress and activist. Becky G was born for the spotlight and her multifaceted career is shaping up to be nothing short of iconic. The 24-year-old global superstar’s achievements include two number one hits on the Billboard Latin Airplay Charts (“Mayores” & “Sin Pijama”), a starring role in “Power Rangers,” and guest-starring in Fox TV’s Emmy-winning “Empire” series.

Becky recently accepted the Agent of Change award at the 2020 Premios Juventud (Latin Youth Choice Awards) for her activism and using her platform to inspire positive change. In 2019, she accepted the Extraordinary Evolution Award at the 2019 Latin American Music Awards for her success as a young performer who has reached the pinnacle of success in a short period of time. She has also been honored by the Latin Recording Academy as one of the Leading Ladies in Entertainment (2018) and by her home city of Inglewood, California for her contributions to the Hispanic community; she has been recognized as one of Rolling Stone’s “18 Teens Shaking Up Pop Culture” and one of Billboard’s “21 Under 21”.

The multitalented star has hosted a number of prestigious award shows throughout the years including the 2019 European Music Awards (MTV) and the Latin GRAMMY Ellas TV special.

Additionally, she launched the “En La Sala” podcast with Amazon Music – live from her living room during the lockdown. With every episode, Becky donated $10K to a charity of her choice, and spoke to high-profile guests from Vice President-elect Kamala Harris about politics to reggaetón star J Balvin about mental health.

As the granddaughter of Mexican Immigrants, born and raised in Inglewood, California, Becky is no stranger to hardships and is passionate about her community. She uses her massive platform to speak out against inequality and raise awareness on social issues, including Black Lives Matter and DREAMers, and has made it a point to give back to her community along the way.

Becky is currently a brand ambassador for Xfinity Comcast and Michelob Ultra Pure Gold and has successfully released her own makeup collections with ColourPop cosmetics, a clothing collab with PrettyLittleThing and an eyewear line with DIME Optics.